Preheat the oven to 450°F. In a large measuring pitcher or large bowl, whisk together the flour, pepper and salt. Whisk together eggs and milk in a medium bowl until very well combined. Slowly whisk the milk mixture into the flour mixture (the batter will be a little lumpy at this point), and set aside.

Place a 12-inch cast-iron skillet over medium-high heat and add the oil. While it’s warming up, add the rosemary and stir it around until it smells fragrant, 30 to 60 seconds. Remove the rosemary to a plate, leaving the infused oil in the skillet. Add the sausage and sear until nicely browned on both sides, 4 to 6 minutes. Meanwhile, briefly whisk the batter until smooth and have it near the stove.

When the sausages are browned, remove the hot skillet from the heat and quickly pour the batter around them and sprinkle the rosemary sprigs over the batter. Immediately transfer the pan to the oven and bake until deep golden brown, puffed and crispy around the edges, about 30 minutes. (For best results, avoid opening the oven until at least 25 minutes have passed.)

To make the gravy: Melt the butter in a 10-inch skillet and add the onions, salt and pepper. Cook over medium heat, stirring occasionally, until lightly browned, about 15 minutes. Add the flour and stir until it is moistened, about 1 minute. Remove the pan from the heat and stir in the apple cider until well incorporated. Return the pan to the heat and gradually add the stock while whisking to prevent lumps from forming. Add the rosemary sprig and bring the mixture to a simmer. Cook until the gravy thickens slightly and the flavors meld, about 10 minutes. Taste and adjust the seasoning. Discard the rosemary sprig and serve the hot gravy poured over the toad in the hole. 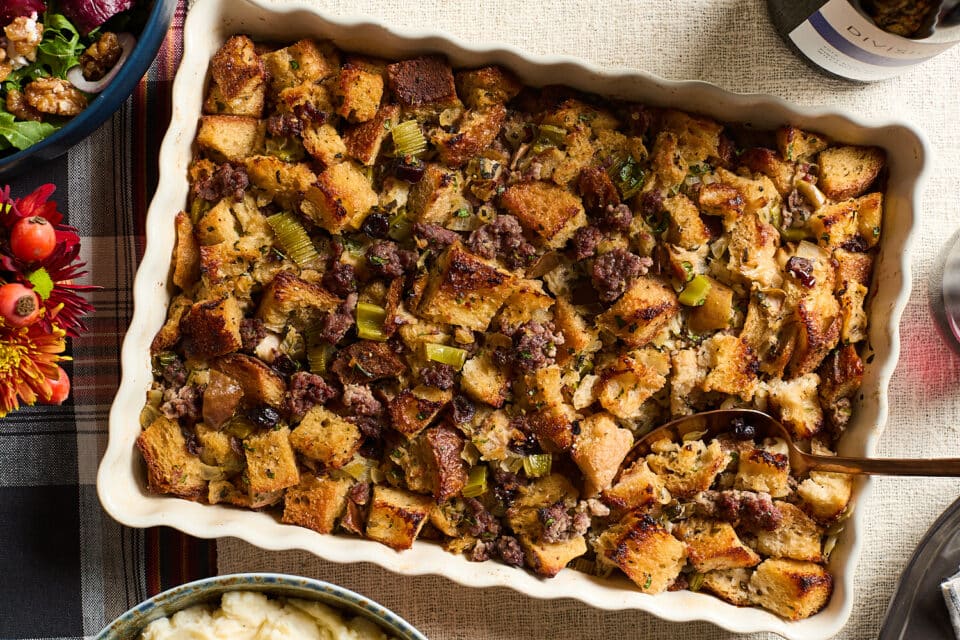 Featuring our Cranberry Red Wine pork sausage, this side will be the highlight of your holiday table.