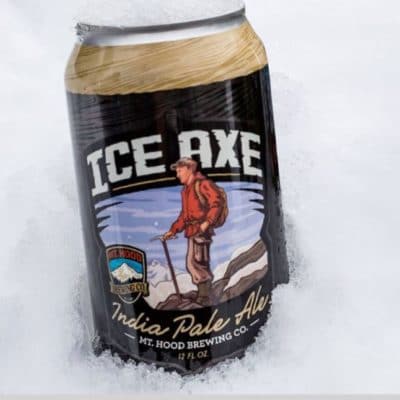 Mt. Hood Brewing Co. opened in January 1991 in the alpine village of Government Camp, Oregon. Their distinctive ales are produced from pure glacial water, Pacific Northwest barley & hops, and the inspiration of Mt. Hood Brewing Co.’s brewers. Founded upon the notion that beer is best when produced in small, handcrafted batches utilizing the finest ingredients, Mt. Hood Brewing beer is only available in the state of Oregon.

While typically their beers can only be found at their brewery locations on Mt. Hood & Portland and at Timberline Lodge, Zupan’s Markets is proud to currently be an EXCLUSIVE grocery seller of their Ice Axe IPA in 6-pack cans. Considered their flagship beer, Ice Axe IPA is an easy-drinking, timeless British-style IPA brewed with a base of British crystal malts and large doses of KG hops.