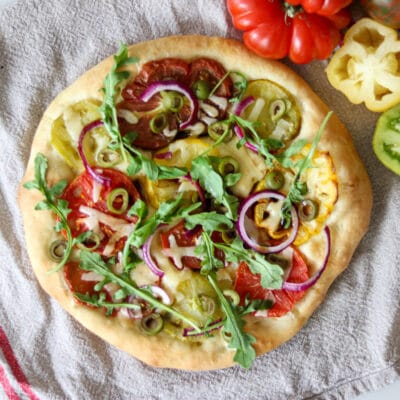 Measure the warm water into a 2-cup liquid measuring cup. Sprinkle the yeast over the top and let stand for about 5 minutes. Add the olive oil and stir mixture.

Place flour and salt in the bowl of a standing mixer fitted with a paddle attachment. Briefly combine the mixture on low speed. With mixer running on low speed, slowly add the liquid ingredients and continue to mix at low speed until a cohesive dough forms. Replace the paddle attachment with a dough hook. Knead dough until smooth and elastic, about 8 minutes. Form the dough into a ball, oil the mixing bowl, and place the dough back into the bowl. Cover bowl with plastic wrap. Let dough rise until doubled in size, about 1 – 2 hours depending on temperature in kitchen.

Place a pizza stone on the bottom rack of the oven and preheat to 500°F. Lay three large sheets of parchment paper on the counter. Divide the pizza dough into three pieces and lay each piece on a sheet of parchment paper. Cover each round of dough with a clean kitchen towel (to avoid dough from drying out). Let the dough relax about 15 minutes covered.

Working with one piece of dough at a time on its parchment paper (and keeping others covered), shape each piece into a smooth ball, dusting with flour only if the dough becomes sticky. Starting at the center of the dough and working outward, use your fingers to press the dough until it is about ½-inch thick. Continue stretching and pressing the dough until it reaches about 12-inches in diameter.

Slide the pizza with the parchment paper on the heated stone. Bake about 8-10 minutes or until the crust begins to brown. Remove pizza from the oven. Sprinkle with a third of the mozzarella, a third of the olives, and a third of the thinly-sliced red onions. Place pizza back into the oven and continue to bake for about 2-3 more minutes.

Remove pizza from the oven and top with Parmesan cheese, ⅓ of the arugula, and optional balsamic vinegar drizzle. Cut the pizza into wedges and serve immediately. Repeat steps with remaining two pieces of dough and toppings. 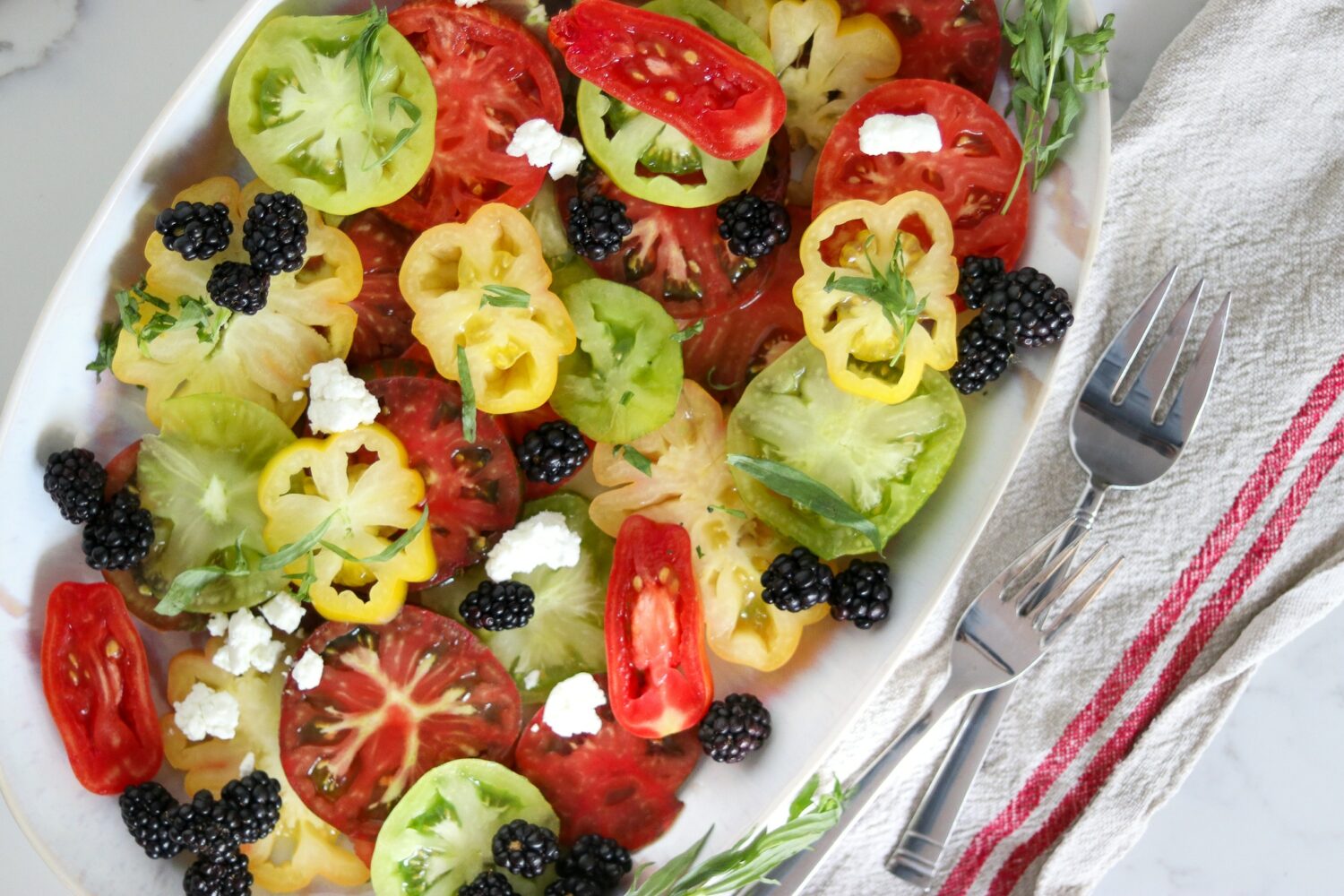 Show off summer’s gorgeous and delicious heirloom tomatoes with this simple salad. 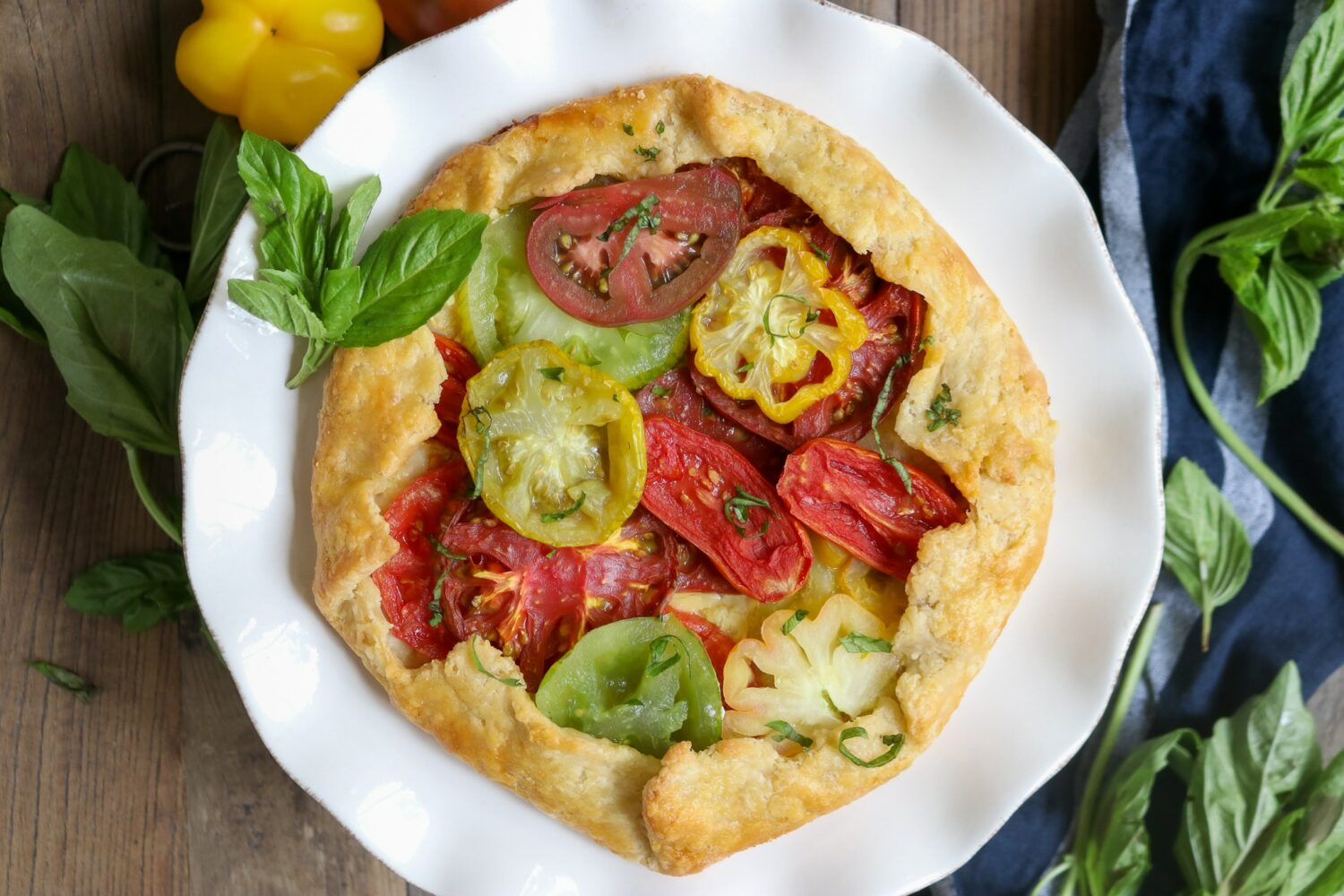 Showcase the beauty and flavor of organic heirloom tomatoes with a rustic galette.